I call it the Blue-Green-Red Resource Squeeze on the American economy. It is neither a perfect nor a straightforward comparison, but it does result in what I think is a rather eerie warning. It is the kind of warning we typically do not read in any number of the emerging climate strategies which we are beginning to see, as good as they may otherwise be.

To see the implications of this “squeeze”, we draw on data from the U.S. Energy Information Administration (EIA) to map and evaluate two key trends: the economic squeeze and the climate squeeze.

The green data points in the chart below represent the economic squeeze. This is the weakening trend in real Gross Domestic Product (GDP) per person, or real GDP per capita over time, within the United States. The blue and red data points, also in the chart below, track the climate squeeze. This is a review of heating and cooling degree days – the growing burden of climate change – also within the United States.

As shown in the chart, we can assess these tendencies over the period 1950 through 2019.  It is a disturbing picture. Almost like a pair of climate jaws clamping down on an already weakening economy. 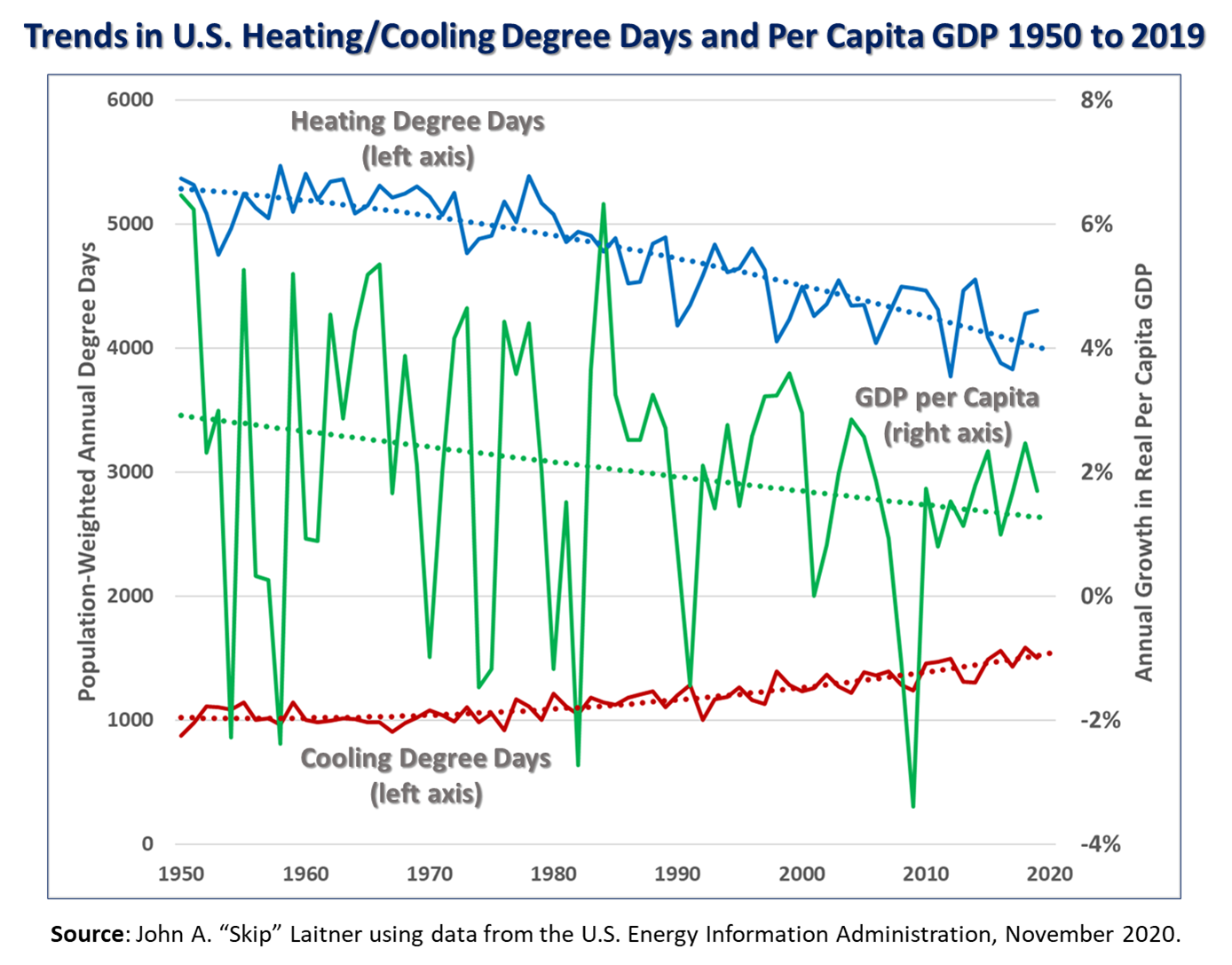 The Squeeze on the Nation’s Per Capita GDP

The growth in real GDP per capita is a useful proxy for the productivity and the robustness of our economy. Admittedly, the GDP does not address the array of cultural issues and injustices that may also be locked into the larger economy. In other words, it does not reference the many income, education, and racial inequalities, nor does it reflect inappropriate sexual harassment and/or workplace limitations – all of which, yes, should be confronted and remedied.

But stepping back, for the moment, and focusing on the larger economic trends in the chart above, the growth in real per capita GDP in the 1950s and 1960s was around 2.4 percent annually. Notwithstanding the volatility of the annual changes, after the turn of the past century, the growth rate fell closer to 1.2 percent per year. This is a development which has been underway well before the pandemic emerged earlier this year. In other words, our social and economic well-being appears to be one of slow erosion.

Perhaps a bit more ominous, most projections over the period 2020 through 2050 point to a long-term attrition in both the U.S. and the global economies so that per capita GDP might be about 0.5 percent less than the average over the next 30 years or so.

Without going into the calculation details, but accounting for a similar population growth, the data all point to a U.S. economy that may be as much as $5 trillion smaller in 2050 compared to one that might have grown at the bigger historical rates of growth. While that may benefit the climate, at least somewhat – which is to say, a weaker economy likely means perhaps 15 percent fewer greenhouse gas emissions by the year 2050 – it also implies significantly fewer funds for investment, healthcare, education, and climate change solutions over the next three decades.

The Trend in Degree Days and Rising Annual Temperatures

At the same time, the winters are getting warmer (fewer heating degree days) and the summers are also heating up (more cooling degree days). Both trends are indications of a rapidly warming planet – witness the wildfires on the West Coast and in the Rocky Mountains, and also the surge in tropical storms and hurricanes in the Atlantic Ocean and the Gulf of Mexico.

As suggested earlier, as we look at the graph, we can think of the fewer heating degree days (the blue lines) and the increasing cooling degree days (the red lines) as a pair of jaws slowly clamping down on an already weakening economy. One of the many indications of damages to the economy?

According to data released by the National Oceanic and Atmospheric Administration (NOAA), the U.S. weather and climate costs in the 1980s averaged ~$18 billion per year. In the last three years (2017 to 2019) that grew to ~$154 billion per year. Without any further remedies or reductions in greenhouse gas emissions, a simple extrapolation suggests the total could reach ~$500 billion by mid-century without any further action (with all dollars CPI-adjusted). And that is just part of the story.

The Driver and the Solution?

Both the warming trend, and the slow erosion of the economy (independently of climate, but also affected by it), appear to be driven by the hugely inefficient use of resources as we’ve suggested elsewhere. In fact, the suggestion is that we may be “living more by waste than ingenuity.” This is true whether we are talking about the wasteful use of capital, materials, food, and water, but especially the unproductive use of fossil fuels. The scale of conventional use of energy and the associates waste of all resources can be seen as a common causation of both a weakening climate and the growing burden of climate.

A previous report, Smart Policies and Programs as Critical Drivers for Greater Energy Efficiency Investments, underscores the potential for a 40 percent reduction in global energy requirements. With the combination of proactive, science-based dialogue and rethinking the past, we can break out of the current logjam and shape a healthier social, economic, and environmental well-being.

If we choose not to do so, the failure to act will clearly erode the nation’s long-term social and economic prosperity. 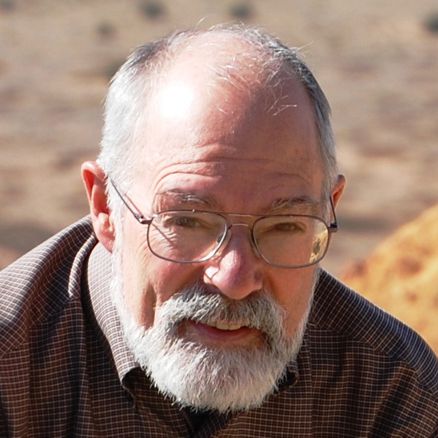 Want to hear more from Skip? Check out our podcasts with Skip:

The Economics of Climate Change

Getting Connected and Investing in a Sustainable Economic Future

Getting Our Big Brains in Gear: Rebuilding Our Tomorrow

For questions, comments, or further information, feel free to contact me at EconSkip@gmail.com. Or check out our website.