Know Where to Throw- Recycling Do's and Dont's 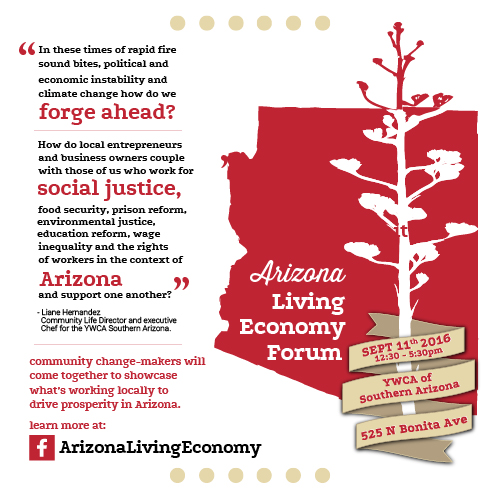 On September 11, 2016, community change-makers will come together in Tucson for the first Arizona Living Economy Forum to showcase what’s working locally to drive prosperity in Arizona. This inaugural event is hosted by Local First Arizona, Mrs. Green’s World and the YWCA of Southern Arizona.  The event will be held from 12:30 p.m. – 5:30 p.m. at the YWCA of Southern Arizona at 525 N. Bonita Avenue.

The idea for the Tucson event came about when representatives from the three aforementioned organizations attended the national BALLE (Business Alliance for Local Living Economies) conference in Phoenix in June of 2015. “We were exposed to programs all around the country that are creating real prosperity from the ground up,” says Local First Arizona’s Southern Arizona Director, Erika Mitnik-White. “The question we kept asking was how can we build and sustain these new economy models in Tucson?”

The BALLE event linked up these three different organizations when they realized they had very similar goals. “In these times of rapid fire sound bites, political and economic instability and climate change, how do we forge ahead?” says Liane Hernandez, Community Life Director and Executive Chef for the YWCA of Southern Arizona. “How do local entrepreneurs and business owners couple with those of us working for social justice, civil rights, food security, prison reform, environmental justice, education reform, wage inequality and the rights of workers in the context of Arizona and support one another?”

As part of their commitment to stay connected to work that brings about meaningful and sustainable change, the group of Tucson BALLE attendees first reconnected with over twenty other Tucsonans, including Mayor Jonathan Rothschild, in January of 2016 as part of a Beyond event. The Beyond events commemorate those lost in the attack on former Congresswoman Gabrielle Giffords’ Congress on your Corner event on January 8, 2011, and celebrate the spirit of togetherness Tucsonans felt following the tragedy by helping the community recommit to building a stronger and healthier future. “On a day that was very emotionally charged, being able to have these conversations about how we can grow stronger as a community was very healing,” said Mitnik-White. “It made sense to open up this wider conversation to the public at the first Arizona Living Economy Forum on September 11th.”

The Arizona Living Economy Forum aims to bring together influencers from many areas to showcase ideas that are working in our community and how we can expand them. The Keynote address will be presented by Dr. Maribel Alvarez, a nationally recognized public scholar named by Community Arts as a “bridge” between academia and social engagement. Dr. Alvarez is the Folklorist and Program Director of the largest folklife public event in the Southwest – Tucson Meet Yourself.

“We are a time in American history when we need our story to change and, in turn, change our future,” says Gina Murphy-Darling, founder of Mrs. Green’s World. The Arizona Living Economy Forum is a place to foster the discussions that change that story. Each of the six Forum tracks covers a topic that is significant for the advancement of Tucson’s and Arizona’s local economy, and stem from the tracks of the 2015 BALLE Conference:

“The discussions and actions sparked at the BALLE 2015 conference in Phoenix are critical to the advancement of growing healthy, equitable economies everywhere,” says Pamela Chaloult, COO of BALLE. “BALLE is thrilled that the conversations are continuing and that the Arizona Living Economy Forum is hosting this pivotal event in Tucson which will support change makers in their place and be a model for others to follow.”

Tickets for the Arizona Living Economy Forum are $10 for an all day pass which grants entry to all six Forum tracks and the post event cocktail reception.  Tickets can be purchased online here: http://bit.ly/AZLEFtix

Since 2008, Mrs. Green has been a leading voice for living more sustainably, educating and inspiring thousands of listeners around the globe through her radio show, “Mrs. Green’s World.” The show is followed by thousands of listeners around the world, and has grown to include a weekly podcast, and has attracted rock stars of the conservation world including Dr. Jane Goodall, Ted Danson, and Laurie David, Author and Producer of FED UP, the Movie and Movement. “Mrs. Green’s World” is carried on 6 national radio networks including iHeart Radio and listened to downloaded in 29 countries across the globe. www.mrsgreensworld.com

ABOUT THE YWCA OF SOUTHERN ARIZONA

The YWCA Southern Arizona works to eliminate racism, empower women and promote peace, justice, freedom and dignity for all. Key YWCA programs include workforce education and leadership development. In 2015 the YWCA expanded programming to include business classes and counseling by assuming management of the Microbusiness Advancement Center of Southern Arizona (MAC). That agreement brought the WBC under the umbrella of the YWCA. More than 30,000 people annually receive YWCA services and programs at the Frances McClelland Community Center, the YWCA’s main campus located at 525 N. Bonita Avenue, Tucson. www.ywcatucson.org.

Back To All Blog Posts
Podcasts
Videos

Know Where to Throw- Recycling Do's and Dont's